An app guides you through former satellite camps

Knowledge dissemination, especially to young people, is an important part of the work of Mauthausen Committee Austria (MKÖ). On 8 August 2018, in remembrance of the construction of CC Mauthausen 80 years ago and as a warning, Mauthausen Committee launched the Mauthausen Satellites App with information, photos and videos about the history of the camps and their survivors.

Vienna, 8. August 2018 – Sensitizing young people has been of enormous importance to survivors of Mauthausen Concentration Camp and its satellite camps. With the transfer of their legacy in 2000, these survivors also passed on this responsibility to Mauthausen Committee.

Christa Bauer, Executive Secretary of Mauthausen Committee, addresses the importance of digital knowledge dissemination: “Not only young digital natives but also history-interested persons of all ages can now visit all Mauthausen satellite camps virtually. This is another step toward remembering the crimes of the Nazi regime and to herald 'Never again!'"

For each of the 49 locations of satellite camps of Mauthausen, the new app enables you to invoke information about the history of the former camp (e.g., origin, topography, forced labor, perpetrators, victims, and closure or liberation). In addition, historical and current photos, aerial photos of the sites, and short videos and interviews of survivors visualize the history of the satellite camps. Eyewitnesses tell about their experiences and fates, and about the time after 1945 and the importance of working toward "Never again".

"Digital knowledge dissemination is an important step with regard to historic documentation and appraisal. Young people have become easiest to reach via app or social media. If historical content is prepared interestingly and interactively for this target group, this can help to sensitize them about racism, fascism and intolerance. Mauthausen Committee has made an important first step with this app", says Bernhard Jungwirth, CEO of Austrian Institute for Applied Telecommunications.

You can explore the former satellite camps using 23 interactive virtual tours. The tours provide additional information about individual stations on the tour and the grounds; they can be employed individually on your smartphone and from anywhere. This enables you to study the topic at home.

To augment the information about former satellite camps, via Mauthausen Committee you can book a guided tour with certified Mauthausen satellite camp guides www.mauthausen-guides.at. The guides have been in service since 2011 and accompany visitors to the satellite camps on site as well as through the entire preparatory and follow-up stages. The guided tours are available at 22 locations of former satellite camps: Guntramsdorf/Wiener Neudorf, Hirtenberg, Hinterbrühl, Melk, Redl-Zipf, Lenzing, Vöcklabruck, Gusen I, Gusen II, Ternberg, Großraming, Dipoldsau, St. Valentin, Steyr, Peggau, Wagna/Leibnitz, Bretstein, Schloss Lind, St. Lambrecht, Loibl Nord and Loibl.

In the course of this app development, in memorial year 2018 Mauthausen Committee started another digital project in cooperation with Hearonymus. Monuments and memorial sites shape the image of downtown Vienna. To share their history with young people, Mauthausen Committee offers topical tours through downtown Vienna via the project "denk mal wien". Especially prepared for young people, the topics and tours focus on the history of the republic and the Nazi period while they continuously make reference to the present. The goals are to sensitize young people regarding current problems such as right-wing extremism, racism and anti-Semitism and to motivate them regarding democratic consciousness, civil courage and working together.

Peter Grundmann, CEO of Hearonymus states: "We are happy to support the work of Mauthausen Committee, on the one hand because remembering the victims of the Nazi regime is an issue that is close to our heart; on the other hand, Hearonymus uses smartphones for knowledge dissemination and thus can make the topic accessible and interesting for young people. Via our audio-guides for mobile phones, the history of the numerous monuments and memorial sites is available anytime and anywhere, 24/7, worldwide. And the moving eyewitness testimonials can also be heard by future generations."

Since 2006 more than 7000 young people have enjoyed the opportunity to participate in "denk mal wien". The four successful tours – "We are heroes!", "Republic and democracy", "We and the others" and "What is Austria?" are now available digitally for free via an app from Hearonymus, for listening and exploring. Hearonymus is specialized in the production of professional audio-guides for smartphones for culture and tourism, with more than 500 guides available. This cooperation now enables young people to independently explore the history of the inner city and to educate themselves.

"In past years more than 104,000 young people participated in our projects. When we work with young people, it is important to establish reference to the living reality of the young people," explains Willi Mernyi, Chair of Mauthausen Committee Austria. "These two apps afford a new approach to digital and multimedia knowledge dissemination via mobile phone."

We are very grateful for financial support toward the development and implementation of the app on the part of the City of Vienna, the Future Fund of the Republic of Austria, and the Office of the Federal Chancellor of Austria. The Mauthausen Satellite Camp app is currently available only in German, but as soon as additional financial support is found, additional languages are planned. 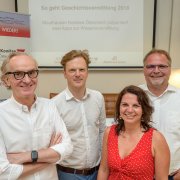 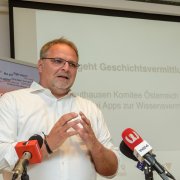 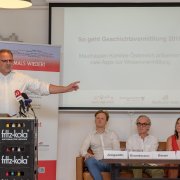 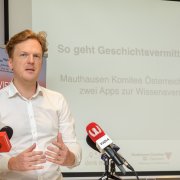 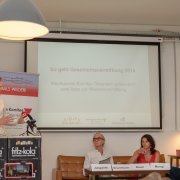 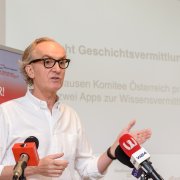 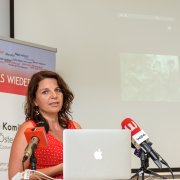 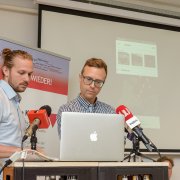 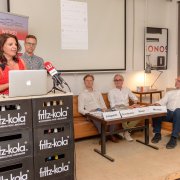